Norman shared a story with Wings of Hope that demonstrates how they are changing and saving lives along the Miskito Coast.

In early April, the Hansens received a phone call stating that a 6-year-old boy named Garby was bitten by a Barba Amarilla, or venomous pit viper, early in the morning at a remote community near San Carlos on the northern border of Nicaragua. This is an extremely poisonous snake and the venom is fast-acting. The little boy was in dire need of emergency medical transport to Waspam, the nearest pueblo, to receive the antivenin. The fastest route to the hospital from the community was 10 hours by boat along the River Coco. They called the AWA base in hopes that the Hansen family would be able to provide emergency air transport. Unfortunately, AWA had not yet received landing permissions for that community and did not know how they would be able to carry out the mission. Norman and Nancy pleaded for emergency landing permissions which were, unfortunately, not granted. At this point, the pair had to think creatively if they wanted to save the boy.

They thought, “If we can’t bring the boy to the antivenin, then we will bring the antivenin to the boy” –and quickly fabricated a plan to airdrop the medication to the boy in his village. They hoped that the boy would survive the night as they planned to make the drop in the morning. Having never done an airdrop before, Norman and his son spent all night researching the best methods to minimize the breakage of vials.

To prepare for airdropping the antivenin into the village in San Carlos, they woke at 4:30 a.m. and completed a practice drop over the runway at their base in La Tronquera. When they felt confident, the two took off toward the village.

Norman flew in low to the ground and his son opened the door and dropped the package of antivenin. The drop was a success – out of 100 vials of antivenin, only one broke! Because of the efforts of the Hansen family, only 24 hours after being bitten, Garby was able to receive the lifesaving antivenin. The pain he had been experiencing began to subside and, after a few days, Garby was running and playing again.

This success story would have never been possible without the dedication of the Hansen family and the lifesaving power of aviation. 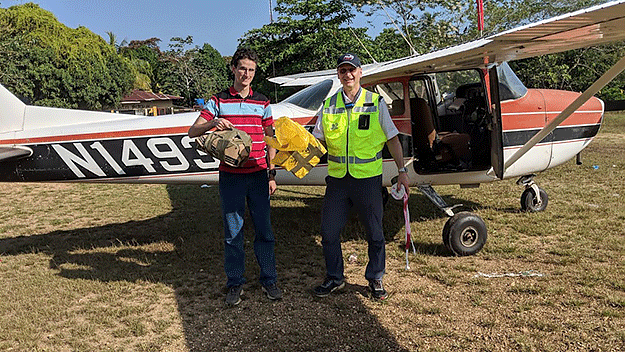