As demand for flights grows, the number of volunteer pilots supporting the MAT Program is at its lowest in years.

“With just 12 pilots, we are limited,” says Walleman.

A few years ago, the MAT Program boasted 22 volunteer pilots.

One factor impacting the number of pilots is the organization’s requirement that pilots retire at age 75. Recently, two veteran MAT pilots aged out of the program. Fortunately, a couple of new pilots joined the team including Damian Mahoney, son of MAT pilot Mike Mahoney. The father-son duo made their first flight together on October 20, transporting a patient from Tennessee to Shriners Children’s St. Louis.

The MAT Program serves many Shriners patients, including 13-year-old Caleb who has completed 17 roundtrip flights with Wings of Hope from his home in Wichita, Kansas, to Shriners Children’s St. Louis. Caleb was born with a short femur bone, making his right leg shorter than his left.

He had his first surgery at Shriners when he was three. His mom, Crystal, says his last big leg-lengthening surgery is scheduled for May 2023, although he will require smaller surgeries to remove the “hardware” in his leg. Doctors anticipate Caleb will be finished with medical treatment by the time he turns 15.

Crystal says flying with Wings of Hope has made Caleb’s medical journey “so much easier.”

“We just go to the airport here, Wings of Hope picks us up, everybody takes us where we need to be — and we turn around quickly,” she says. “We’re not gone more than we have to be.”

Caleb is the oldest of three brothers, so flying with Wings of Hope “helps get us back home to the family instead of spending long periods of time on the road,” says Crystal.

“Traveling alone on I-70 with all those semis going by was stressful,” she says.

After his first leg-lengthening surgery, Caleb had a cast running from his waist to his ankles.

“An hour-and-a-half to two hours on a plane is a lot more comfortable than seven hours in car in a cast. It takes the financial burden off, too,” Crystal says.

Caleb is looking forward to putting his final leg-lengthening surgery behind him in May. In the meantime, he enjoys drawing and participating in his school orchestra.

“Caleb is first chair violin in his orchestra, and he got picked to be in the Suburban League,” says Crystal. “He’s also going to be performing a solo guitar piece with the orchestra accompanying him for a song.”

The MAT Program flies many children such as Caleb, but it is also fielding a lot more requests for end-of-life flights, with people seeking help reuniting hospice patients with their families in their final days.

While Wings of Hope cannot fulfill every request — most often because it is out of the MAT Program’s flight range — Walleman says her team does everything in its power to help.

“Every person who contacts us always leaves us, if we can’t help them, with three legitimate resources that they can contact for help.”

One type of request the MAT Program can’t fulfill is for an emergency flight.

“We had two requests that came in this morning, and they need to fly tomorrow,” says Walleman. “We can’t do that.”

Walleman says requests for flights go through a “thorough vetting” involving all parties, including medical providers. It typically takes about two weeks to schedule a flight.

“If someone has an emergency, we provide them options, like Angel Flight or whatever organization serves their area,” says Walleman. “But if you anticipate needing another flight down the road, do fill out that paperwork and send it to us because we might be able to help you the next time.”

In every case, Walleman encourages people to call if they think Wings of Hope can assist them. 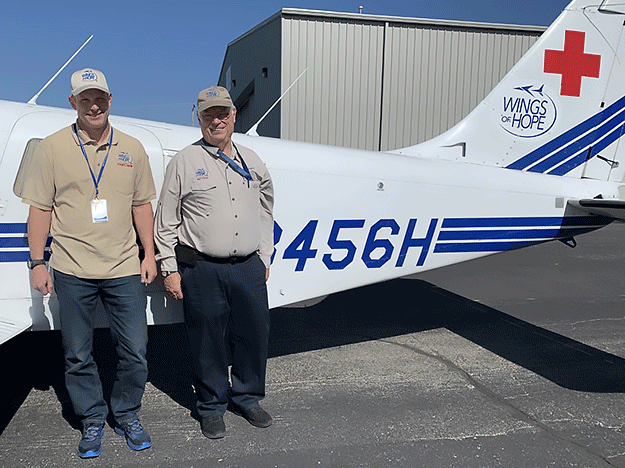